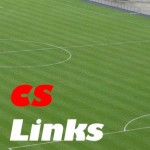 “CONSA DE CONSA” site is “Hokkaido Consadole Sapporo” fansite, not official page. “Consa” is the nickname of our favorite club. This site is managed by 1 fan of consadole. Here provides the information of the club.