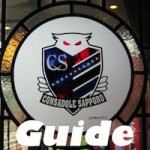 History Consadole is was born at 1996. The predecessor of Consadole is TOSHIBA FOOTBALL CLUB (amature, company team) in Japan Football League (JFL). In 1996, Toshiba FC, which wished to change to pro-team from ama-team in those days, moved to Sapporo City from Kawasaki City (in Kanagawa Prefecture), and become a new proffesional club team, … END_OF_DOCUMENT_TOKEN_TO_BE_REPLACED

ATSUBETSU PARK ATHLETICS STADIUM Consadole Sapporo has two home stadium. One is this Atsubetsu, and another one is Sapporo Dome. This Atsubetsu stadium is initial home stadium of Consadole. After opening of Sapporo dome(2001), Consadole use both stadiums for home games. Capacity: 20,005 spectators Location: 3-1-2-1 Kaminopporo, Atsubetsuku, Sapporo City, Hokkaido Prefecture, Japan Opened: 1986, … END_OF_DOCUMENT_TOKEN_TO_BE_REPLACED

We are Hokkaido Consadole Sapporo !!! “Hokkaido Consadole Sapporo” is professional football club, and belong to Japan profeesional Football League (J-League). Consadole was born at 1996. Consadole’s hometown is Sapporo City (Hokkaido prefecutre) where is in the north of Japan, formerly opened Winter Olympic Games in 1972. The club name of “Consadole” is made from … END_OF_DOCUMENT_TOKEN_TO_BE_REPLACED

Sapporo City Hometown of “Hokkaido Consadole Sapporo” is Sapporo City in Hokkaido Prefecture. The city is biggest city in the north of JAPAN. Sapporo is a young city with a vibrant cosmopolitan atmosphere. It looks to the new millenium confident of offering its citizens and visitors greater prosperity and an ever-improving quality of life. The … END_OF_DOCUMENT_TOKEN_TO_BE_REPLACED