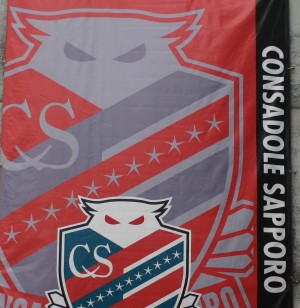 Consadole Sapporo got a last seat for promotion to J1(top league of J-League) in season’s final game.

The only 3 of 20 clubs could rise to J1 from J2. FC Tokyo got already the champion trophy of J2, and a promotion seat to J1. 2nd seat was almost gotten by Sagan Tosu. Only third seat was remain. Consadoele Sapporo and Tokushima Vortis competed to get this final seat.

Final games(Consadole Sapporo vs FC Tokyo) of 2011 J2-season was a home game of Consadole at Sapporo Dome. 39,243 fans rushed and filled this stadium for their critical game.

UCHIMURA Yoshihiro opened the scoring in the 40th minute for Consadole, the chance created with the FURUTA Hiroyuki. After 5 minute, UCHIMURA got 2nd goal before half time. YAZAWA Tatsuya pulled one back in the 80th minute for TOKYO. Consadole keeper LEE Ho Seung kept advantage of 1 goal until time’s up. Consadole Sapporo fell 2-1 at home to the champions FC Tokyo, and got a last seat for promotion to J1 in front of many frenetic fans.